When it comes to playing guitar, there are many variables that can have an impact on sound and style. Even though the standard tuning is arguably the most common, there are a lot of different options that give you the opportunity to explore different sounds and combinations of chords. In this article we’ll show you some of the most popular guitar alternate tunings.

In this guide, you’ll find:

Why Using Alternate Tunings for Guitar?

If you feel like you’ve been using the standard tuning for a while and you want to try something new, you have a couple of options. There are a lot of interesting accessories you could try to change the sound of your instrument, to play it differently or to better adapt it to your style.

But if you don’t have a very high budget or you simply don’t care about pedals, amps or other accessories, another peculiar but very interesting solution could be tuning the strings of your guitar differently. This will give you great chances to improve your guitar skills and learn new ways to have fun with your instrument. Let’s now go through all the most popular alternate guitar tunings.

Drop D is probably the most common alternate tuning on guitar. One of the main reasons that made this tuning so popular is clearly the easy switchability from a Standard Tuning to Drop D. All you need to do is drop the sixth string from E to D.

Drop D allows you to play a lot of chords simply using one finger and gives the sound great deepness and groove. One of the main benefits of Drop D tuning is the opportunity to play power-chords using only one finger. This way, you’ll have more fingers available to play variations and apply creativity to your music.

Drop D tuning is commonly used by hard rock and metal bands, as it gives the chance to play faster. However, Drop D is also very much appreciated by blues lovers, as it gives your guitar a thicker and unique sound.

We just mentioned that Drop D is very famous in heavy music. However, some of the most famous songs in the history of rock n’ roll were written using a Drop D tuning.

You probably know Everlong by Foo Fighters, Heart-Shaped Box by Nirvana or Killing in the Name by Rage Against the Machine. These songs are all written using a Drop D tuning and they are very good examples of deepness and thickness of the sound given by this alternate tuning. Artists such as Metallica and Deftones commonly write Drop D songs, but also Van Halen and Neil Young. I’m sure that you’ve already listened to many Drop D songs, without even knowing it!

Open G tuning is very peculiar and interesting. This alternate tuning gives you the opportunity to play a G chord without using the left hand, simply hitting all six free strings.

To obtain an Open G tuning starting from a standard configuration, you have to slack two steps down the first, the fifth and the sixth string.

The fact that you don’t need to put fingers on frets to play a such a popular chord gives you the freedom to play around with notes and scales, to obtain a very “bluesy” sound.

One of the main reasons that makes guitar players pick an “open tuning” is the opportunity to use the slide to create some interesting sounds that could replace the keyboard element in a band.

One of the most famous guitar players using an Open G tuning surely is Keith Richards.He always mentions that Open G tuning helped him to get out of the ordinary world. According to him, the standard tuning was getting “too boring”.

We’ve just mentioned Keith Richard and his love for this guitar tuning, so when it comes to mentioning Open G songs, the first has to be a Rolling Stones song. To be honest, there are many famous Rolling Stones songs played with an Open G tuning. However, if we must pick one, it probably has to be the super popular Start Me Up. Might not be their best song, but it’s definitely one of those songs that pushes you to start playing the guitar.

The list of Open G songs is just incredibly long and goes from Pink Floyed to Led Zeppelin and ZZ Top. Some other famous Open G tunes are Running on Faith by Erik Clapton and Death Letter by The White Stripes. As you can see, all songs mentioned above have a bluesy flavour, which is the main peculiarity of this guitar tuning. If you like to play blues, country or rock n’ roll, this is surely something you want to try out.

C Standard tuning is very popular in Hard Rock music. In C Standard the strings are tuned two tones down the standard tuning. That means that the first string is a C instead of an E, and so on. The reason to pick this kind of tuning can differ. One of the main reasons to choose C Standard Tuning is definitely the intense sound given by the slack of the strings. In a C Standard Tuning, the strings are very loose and you can hear big vibrations in the sound. That makes the sound very groovy and perfect when it comes to heavy music.

Also, tuning the instrument two steps down means putting less tension on the strings. You therefore need less pressure when playing. It makes the job easier, mostly when it comes to bending notes. You can easily bend notes up to two or sometimes even three tones. That would be very hard using a Standard Tuning.

Last but not least, sometimes bands have to adapt their greatest hits to the vocal range of the singer. Usually, a vocalist loses a bit of tone and vocal range after a few years singing. The band might therefore lower their songs and make them easier to sing. In this case, slacking your strings to a C Standard tuning would give you the opportunity to play the song using the original chords, and make them easier to sing in the meantime.

12 String Guitar is definitely a tough one to tune. For this reason, we decided to include it in the list of the alternate tunings for guitar. Even if the tuning setting we’re about to suggest is very similar to a standard one, we like to consider a 12 string guitar as something that is quite different from the ordinary. When looking for a good tuning, it’s very important to keep in mind that there’s never a right and a wrong tuning option. In music there’s always one rule: if it works, it’s right. Make sure to give enough space to your creativity and explore all possibilities out there.

A good starting point when tuning a 12-string-guitar is metaphorically splitting the neck. of the instrument horizontally. You will be building the sound in order to obtain intensity and volume on the high notes and great harmonisation on the low strings.

For this reason, we want to harmonise the low octave strings tuning them down a major sixth above the original tuning. This way we have:

When it comes to the thin strings, we want to tune the G strings one octave apart, so they both will be Gs and we want both Bs and Es strings to be identical.

So, in the end, the 12 strings should be tuned like this: 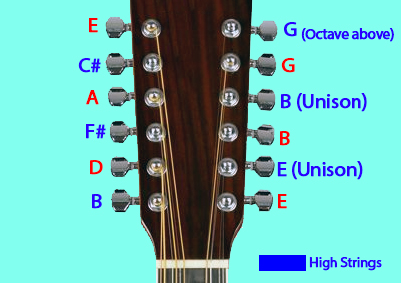 The sound you will obtain will have high intensity and great harmonisation.

Obviously, this is just a starting point. If you want to, you could try to harmonise even more, tuning the high strings to a different course. But that’s all up to you. Give this a go, see how it sounds and create your art with no limits!

Above we’ve seen some of the most common alternate tunings for guitar. Obviously, there are no set rules and you can be free to test all the weirdest combinations of notes.

However, the three options mentioned above can be considered good starting points to then build all the popular alternate tunings. If we want to play a song in a Drop C Tuning, all we have to do is tune our instrument one step down the Drop D Tuning. This way we obtain a Drop C.

Let’s now assume that we want to apply an Open C Tuning to our guitar. All we have to do is make sure that when we play all free chords we have a C chord. That means: the three notes that make the C chord are C, E and G. Starting from a standard tuning, let’s make sure to tune the strings to match one of those three notes. Specifically, we can leave the first string on the standard E, we can move the second string from B to C, and we can leave the third string on the standard G. Then, the fourth string can drop from D to C, the fifth string can go from A to G and the sixth string goes down to C. And here we have an Open C.

We’ve just seen some of the best alternate guitar tunings you could possibly test. According to the style and genre of music you play, you can choose to tune your instrument differently.

However, you must know that there are really good apps that can help you to tune your guitar. If you can’t figure out how to tune your strings to obtain an Open G or a Drop C Tuning, you can use one of these apps by simply downloading and installing them on your phone.

The best guitar tuners apps for your phone will be very helpful and will give you the opportunity to tune your instrument properly before playing.

What’s great about playing guitar? You don’t have to be Slash or Jimi Hendrix to have fun. In fact, you can be a beginner and still enjoy the time with your friends singing popular songs.

But we get it: at some point you just want to test new things and if you don’t have a budget for pedals, amps or accessories, the best thing you can do is go for a different tuning.

In this guide, we’ve just shown you some of the most popular alternate tunings for guitar. Do not forget that music is creativity and you’re free to start from these ideas we’ve just given to you and play your music changing all the rules. However, you’ve just seen all the main configurations that should give you an idea of what you can do according to the style of music you like to play. Make sure to keep up with your passion and practice a lot!

If you’re a beginner on the guitar and you’re trying to improve your skills on this instrument, you must know that there are great tools out there that could be of great help.

Also, there are some very famous rock n’ roll anthems that you could easily play.

Learn some of the best rock n’ roll songs that you could play only on one string!